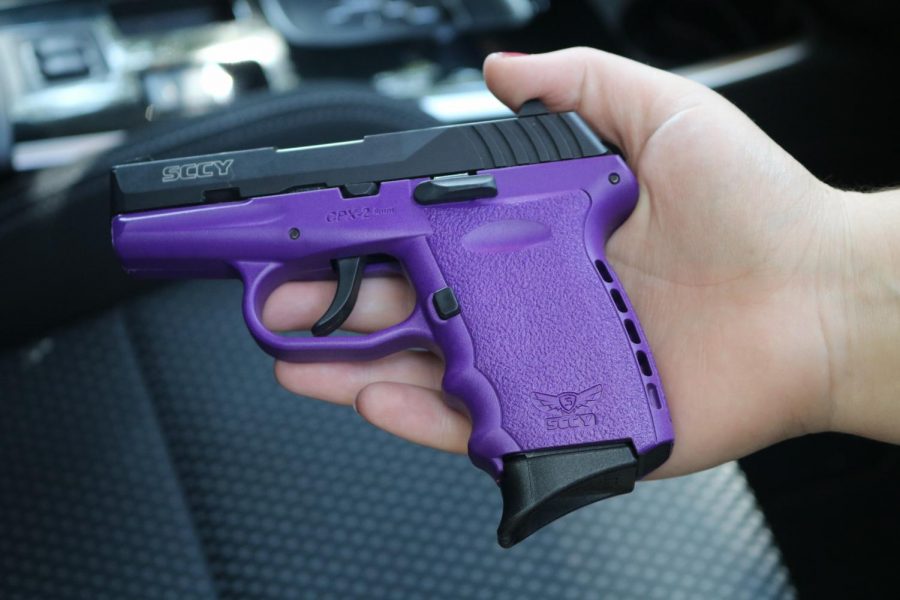 Anonymous holds their personal gun for a photo. Many Americans chose to own a gun for safety.

A Walmart in El Paso, Texas. A popular nightlife district in Dayton, Ohio. The Pulse nightclub in Orlando, Florida. Places such as these were just a few of the many locations for some of the most horrific and violent tragedies to take place on U.S. soil in the past three years. These are chilling examples of gun violence. This has been discussed extensively over the past few decades, and virtually nothing has been able to curb it. Mass shootings and gun-related crimes in the U.S. continue to take place by the day, and American citizens endlessly hope for the bloodshed to end. However, is any progress being made on the issue?

Tuan Nguyen, a foreign language teacher at North Kansas City Highschool, feels unsure that progress has been made, but he’s still hopeful regardless of all the gun violence.

“Every day I get up and I go to school, and I teach. And I hope that we are safe,” Nguyen said.

Mr. Nguyen is confident in his fellow staff members are prepared enough. Yet he is also unsure how things will go if NKCHS was ever invaded by a school shooter.

“We do what we can. Now, God forbid, I don’t want to think about that, but in real life situations, just hope for the best,” Nguyen said.

According to Mr. Nguyen, there should be adjustments to the law. Not the complete abolishment of said gun ownership laws, but some things need to change.

“I’m not arguing for taking away the 2nd Amendment, right? But I believe that there is no room or semi-automatic weapons, AR-15s, or AK-47s,” Nguyen said.

Fellow teacher, Margaret Nurrenbern, like Mr. Nguyen, also teaches language courses, as well as sponsors the school’s Young Democrats of America branch. Like Mr. Nguyen, she too has strong feelings about gun control.

“I recognize that for a lot of people, especially those here in Missouri, their guns are really important to them. And this isn’t about taking your guns away, it’s simply ensuring that there’s policies in place that are going to keep our kids safe.” Nurrenbern says.

According to Nurrenbern, the people shouldn’t solely rely on the government to fix this issue. Instead, they need to unify in order to resolve this situation.

“I think that we have to come together and come into agreement in passing measures that the vast majority of people support, specifically universal background checks.” Nurrenbern says.

Nurrenbern’s sense of public safety is waning, even to the point where she’s trying to be actively aware of her surroundings when she’s in public. Every public area, including schools, are still at risk.

“Because of our shooting situations, I think we’ve all realized that over and over again, this has swept over the country, and we’ve stopped saying it can’t happen here, because unfortunately we know it could.” Nurrenbern says.

Regarding the safety of North Kansas City Highschool, Mrs. Nurrenbern claims that she questions the safety but is, for the most part, confident in the students’ well beings. The staff will act as necessary

“I think at Northtown, we have a presence of teachers, off-campus supervisors, our resource officers, and our administrators being present and just being eyes, but to be honest, it’s our students here that are kind of the first reporters. I always say that if you see something that’s not quite right, say something.” Nurrenbern says.

When it comes to gun-reform, Nurrenbern would like to point out that the fear of the public’s guns being taken away are unnecessary, but changes do need to make for a safer community.

“I think that we have to get out of the idea that when we talk about common-sense gun reform, we are not talking about going in and taking guns from law-abiding citizens. Nobody’s going to do that.” Nurrenbern says.

Duncan Carmichael, a senior at NKC and Vice President of the Young Americans Foundation, believes that when it comes to public safety, American citizens are safe.

“My main reason for that being is that there are people, good people, who have concealed carry and open carry licenses and there are police officers that do not have bad intentions that are patrolling the streets.” Duncan says.

Duncan believes that the government should invest in mental health research and other human based issues instead reforming the gun laws. Claiming it’s the people that is the root cause.

“I believe that the government is doing too much in the wrong place. Something that the government should, instead of spending all this money on banning guns and stronger gun reforms, everybody is blaming the guns, but nobody is talking about the people. We could be putting more research into mental health.” Duncan says.

When it comes to how the topic of gun violence is being handled, Duncan solely believes in the Second Amendment. The government should not fix the issue by taking away or restricting the guns.

“My personal views are constitutional views and that is the right to keep and bear arms shall not be infringed. I personally believe that any gun law is unconstitutional, and I will stand by that until I die. Now do I believe that some places should not have everybody having guns? Yes. And, I do believe that you must be eighteen or older because that is when you are a full citizen.” Duncan says.

Duncan’s faith in the school staff is not absolute. Some staff members he believes are capable of handling a dire situation like a shooter and some he does not.

“Some teachers I am not confident in just because I see them not being able to handle the stress of day to day classwork… Not everybody is able to be under the circumstances where people lives are in danger and keep a full maintained fashion.” Duncan says.

Duncan states the open campus for the school, as nice as it is, doesn’t ensure the safety of the students. Open environment with little monitoring makes for a vulnerable crowd.

“There is no way to secure this entire campus because of the open campus. From a student’s point of view, yeah, I love being able to leave, but looking at it from a logistical and security point of view it’s not good at all.”