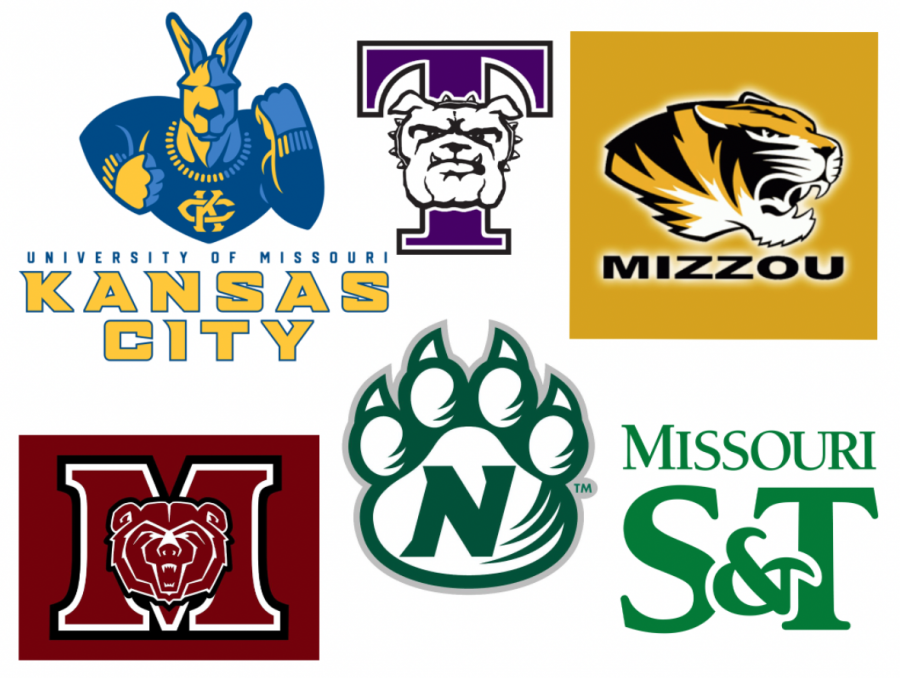 Located in Columbia, Missouri, Mizzou is about a 2-hour car ride from Kansas City. As a member of the SEC (Southeastern Conference), Mizzou is the place to be if you want big sports.

At upwards of 22,616 undergrad students enrolled, your average class size will most likely be large- don’t be surprised if you have lectures with over 100 students. This means that your student-professor relationship will likely be distant.

Mizzou boasts a world-renowned journalism program, with other popular majors being Minority and Ethnic Studies, Business, and Health Service Prep. Looking at info from University of Missouri Admissions, it will cost you $24,092 per year, not including financial aid and scholarships.

MSU is a medium-sized university with an undergrad enrollment of roughly 14,000. It is located in Springfield, Missouri, a roughly 2 hour and 50-minute drive from Kansas City.

Springfield is home to over 100 parks and has a lake nearby for kayaking and canoeing, great for the outdoor enthusiast. MSU is a division 1 (FCS) school and has athletics, however, it is not a huge part of campus life.

The average class size is fairly small, according to Niche, 48% of classes are between 20-39 students. Some popular majors are Business, Psychology, and Elementary Education. One year at MSU will cost you $18,930- but many people will qualify for scholarships and aid.

UMKC is in the heart of Kansas City, so it comes with the advantages of being close to home. You could also be a commuter and save money on room and board!

There are roughly 6,500 undergrad students, making the average class size 26. If you want to study music, UMKC is the place to be in Missouri. Other popular majors are Business, Biology, and liberal arts.

UMKC is a division 1 (FCS) school, but they don’t have football. However UMKC Basketball games are widely attended by students and civilians alike.

M S&T is a bit farther than the other colleges, at almost a 4-hour car drive to Rolla, Missouri. There are 5,692 undergrads, making it a medium sized campus.

M S&T is a division II school, with soccer, volleyball, basketball, football, and more. Missouri Science and Technology is great for science and tech majors. If you want engineering and computer science, this is the place to be.

The academics come at a price, though. As the estimated total cost of attendance is $26,808 for a year. However, it will likely be less than this, as 81% of students receive scholarships (collegefactual).

Truman State is located in Kirksville, MO, about a 2 hour and 35-minute drive from home.

It is a division II, and they do have a football team. Athletic events are attended, but not a huge part of campus life.

A year at Truman will cost you $18,936 but they offer many merit scholarships. The most popular major at Truman is Business, followed by Kinesiology and Exercise Science.

Northwest Missouri is a relatively small school, with an undergraduate enrollment of 4,954.

If you want big sports at a small school, this is the place to be. While NMSU is in Division II, 85% of students say varsity sports are a big part of campus life, and both football and basketball programs are coming off of national championships.

It’s a great medium if you want a bit of everything, but don’t want to be overwhelmed by enormous class sizes and 20,000 people. Northwest is about a 1.5-hour drive from KC, making it easy to come home on weekends.

The most popular major at NMSU is Elementary Education, followed by Communications and Agricultural Business. Northwest Missouri will probably cost you around $15,500 a year.