They Put ‘The Book’ to Bed 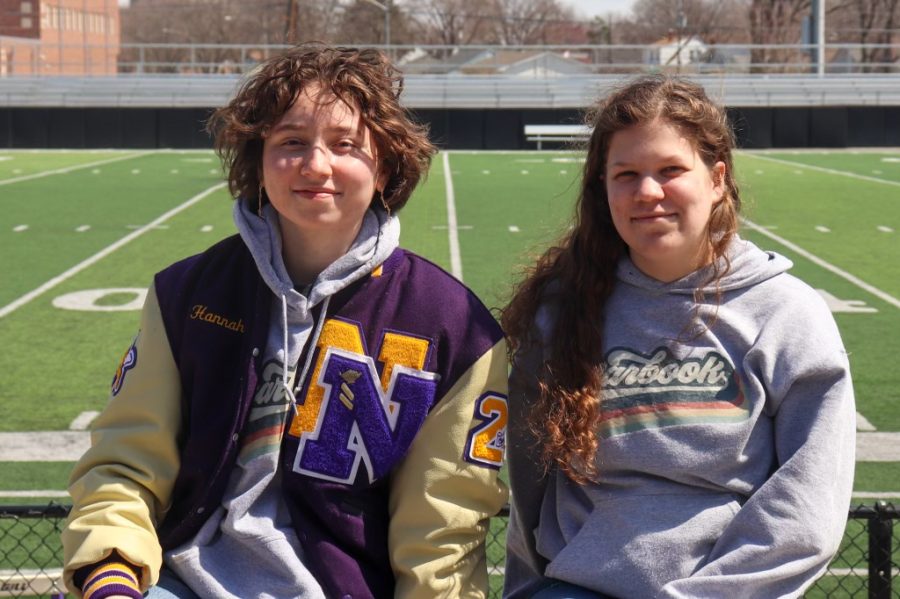 Hannah Schuh and Kaya Barringer pose for a picture following the completion of their senior yearbook.

Every year, there are probably hundreds if not thousands of adults who pour over their high school yearbook decades after graduation. A yearbook possesses the ability to make us reminisce over things we forgot about years ago. This is the exact point of view that award-winning editors Hannah Schuh and Kaya Barringer take in their work. Schuh and Barringer have both been recognized nationally, locally and by their yearbook company during their time on staff. The two didn’t know they always wanted to be in yearbook, but when they fell for photographing, editing, and designing, they fell hard.
Hannah was on her first-ever journalism staff in fourth grade at Briarcliff Elementary, working on a newspaper. The newspaper was short-lived but the passion Schuh had has never gone away.
“I really liked being on a staff in fourth grade, I liked the community aspect of it, as well as getting to be in charge of something I cared about,” Schuh said. This came with her to middle school, where she was eventually editor of the Northgate yearbook. She knew yearbook was for her and enrolled in Journalism 1 Photography coming out of eighth grade and joined staff her sophomore year.
“I loved the class community, and getting to take photos and work on something students would keep for their whole life,” said Schuh.
Schuh compares the yearbook block to a year-long group project- only the reward is so much grander. The PURGOLD (pronounced pur, like a cat purring, gold) staff is specifically unique in their constant competition in journalism contests.
“A thing that makes our staff different is our dedication to giving our staff members recognition. We submit photos into state-wide photo and writing contests every month, and different, bigger contests multiple times a year,” said Schuh.
The PURGOLD is no stranger to winning, most recently at the spring national journalism convention this March the 2020-21 book, “Blank Slate” ranked 8th best in show, in the country. Barringer and Schuh are specifically unique in that this year is their second year as editors, previously being junior. Both Schuh and Barringer are proudest of an award received this fall.
“When we received word from our printing company, Balfour, that our book from this year was selected as a National Sample, despite it not being completed yet. This is an honor that only 3% of yearbooks get and means that extra copies of our book will be sent out to workshops nationwide. It also guarantees us a spot in Balfour’s Yearbook Yearbook, a publication filled with their best yearbooks,” said Barringer.
Barringer found similar interest and admiration for yearbook, taking J1 her freshman year following being on yearbook staff in middle school.
“​​I immediately fell in love with everything about journalism: the importance of it, the meticulous flow of a factual story, and all the research and time it takes to produce a good story,” said Barringer.
It’s no surprise Barringer and Schuh changed the game for the PURGOLD.
“The editors wouldn’t show up to class, would gossip the whole class, and didn’t really care about the book or the staff. Hannah and I came in with a new energy and truly changed the program. The journalism department is criminally underrepresented here, and we have tried to shine a light on all the awards we win and photos we take,” said Barringer.
And they’ve done that.
“They do a FABULOUS job leading class, attending workshops, and creating the yearbook in general. They have won numerous awards for their work. They have truly changed the yearbook program for the better.” said yearbook advisor Mary Prichard, who recently won “Journalism Teacher of the Year.”
Barringer knows her and Schuh’s passion will be hard to find again, but the coming staff can find inspiration from this past year.
“I feel like everything I’ve done on the Purgold can be replicated. We have amazing storytellers and photographers currently on our staff,” Barringer said.
The two balance each other out as Schuh finds designing and photographing to be her niche, while Barringer knows her strong suit in writing and interviewing.
“Hannah might not know it, but she constantly pushes me to be better. She’s a confident leader in class, an aspect that I am very weak in, and her designs and photography are remarkable. I always try and model my work after hers and constantly learn from her,” Barringer said.
Barringer’s time on staff has taught her many things, what she likes doing and knowing what she can’t, but being on staff changed her high school career.
“This ended up being the best decision I’ve ever made, as I now have a community to call my own and a newfound confidence in myself and my capabilities,” Barringer said.

Now, two years as editors down with only a few weeks left of their high school career, Hanah and Kaya embrace the late nights editing and last-minute photo ops, Schuh recommends yearbook staff to anyone.
“If you’re willing to put in the work, it is one of the, if not the most rewarding classes in the school. We say in class all the time, we have one of the few classes where our homework is something everyone else will hold onto for the rest of their lives.”