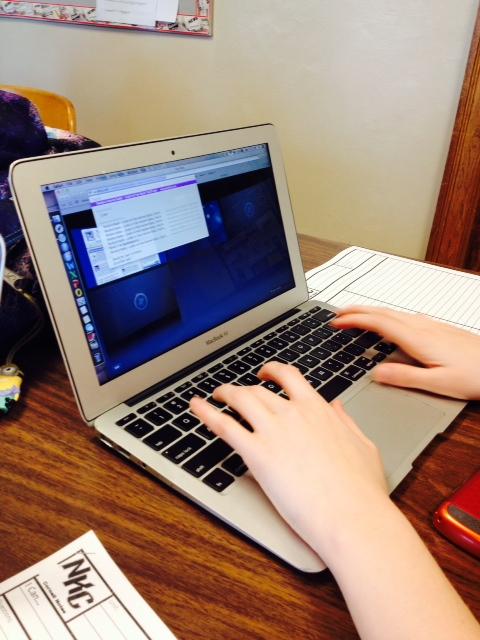 Many websites have been blocked from school MacBooks to prevent distractions. Some sites that aren’t considered inappropriate, social media related, or distracting have been blocked. Students and teachers believe that sites including Pandora and Pinterest could potentially be beneficial to students’ learning and shouldn’t be blocked.

“Some of the sites I understand why they blocked because it distracted lads from learning but others like Pandora don’t make sense because some people learn better with music,” says sophomore at NKC, Jenna Folsom.

Games and websites on MacBooks have been a large issue in the classrooms that distracted kids from what they were learning. Many high schoolers would be on their MacBook to do activities that were non-school related and would be distracted from the lesson.

Even though they haven’t blocked most videogames, they have figured out how to block all students from accessing their favorite social-media websites. These types of sites including Facebook, Twitter, Instagram and Tumblr are blocked when other websites that could potentially be beneficial to learning like Pandora and Pinterest are also blocked.

“Facebook and Twitter, I get (why they blocked) because they could be used for cheating or bullying. Pandora, on the other hand, doesn’t make sense,” says freshman, Tierney Stuart.

“Pandora is for listening to music! We can’t do anything wrong,” says freshman, Gabby Campbell.

Some teachers believe in the idea of prohibiting students from accessing certain websites when others think some websites shouldn’t be blocked.

“I wish Pinterest was unblocked because I’d like to use it for design and photo ideas for Yearbook class,” says, Photography, Journalism and Yearbook teacher, Mary Prichard. Even though social-media websites can be used as distractions to many students, they can also surprisingly be used for many educational purposes.

But has there really been a change in the amount of attention-loss caused by the school MacBooks?

“No. The typical classroom distractions were that the students used their computers for non school-related work. There are still plenty of distractions out there. It’s up to the students to make the right choices,” says Mrs. Prichard.

Choices can sometimes be hard for students to deal with and many may make the wrong ones. This might be the reason that some websites that could potentially be useful to teachers are blocked.

So, is blocking potentially educational websites a good idea? Some believe yes, while others believe no. Social media websites should be blocked to prevent non-educational distractions while other websites like Pandora and Pinterest should be free to use.