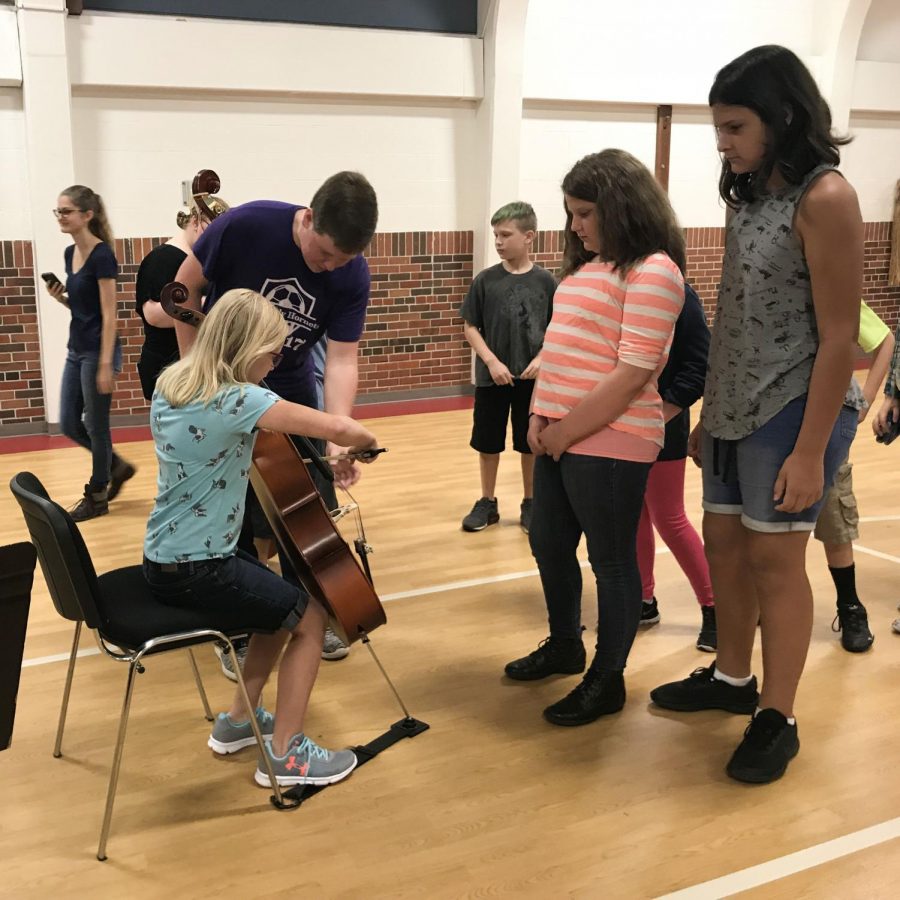 Every year, senior members of the Hornet Orchestra tour at elementary schools. In the school district, the strings program starts in fifth-grade. The seniors played for the fifth-grade classes from Choteau, West Englewood, Briarcliff, and Davidson Elementary.

“My favorite part of the strings tour was interacting with the kids and seeing how they interacted with the instruments,” senior Savannah Noe said.

The purpose of the strings tour is to promote orchestral instruments to the kids interested in the strings program.

“I think the tour is a really good way to encourage kids to join the strings program. I remember being in their shoes—it really makes a difference to see up-close and in person what you can accomplish in our program after just a few years in the program. It also gives the kids a chance to talk to the older students about the program, and to get an idea of where the program can take you,” senior Michaela Quinones said.

The seniors not only played for the students, but they also got to show off the different instruments in the orchestra. A member from each section was chosen to demonstrate what each instrument sounded like.

“I enjoyed “showing off” my instrument. Since I play the violin, I got to be the first to demonstrate the violin. Even just performing a simple scale really got their attention—a lot of the kids haven’t had the chance to see someone play a stringed instrument right in front of them, and I think that for a lot of them, getting a little demonstration was really special,” Quinones said.

The orchestra played different selections from Mozart to more contemporary pieces. The songs included, Symphony No.15, Scherzo, Viola Hero, Cello Squadron, and Can Can Basses.

“My favorite song we played was Symphony No.15 because it sounded the closest to the high school level music that we play, and it had complexity to it that the kids were impressed by,” Noe said.

“I think my favorite song to play for the kids was Mozart’s Symphony No. 15. It’s the only “historic” or “traditional” sort of song that they got to hear from us, and even if they didn’t know what it was, it’s a common enough tune that I think most of them at least recognized what it was. I think it was good to give a variety of songs for them to hear, so they could hear how versatile the strings instrument can be,” Quinones said.

Once the orchestra was done performing their pieces, each fifth-grader got to line up and test out the different instruments.

“[The string demonstration helps] because it gives kids a chance to try out string instruments and see if they like how the instruments sound and if they can see themselves playing said instrument in the future,” senior Shane Beshears said.

Each year seniors from the Hornet Orchestra take a field trip to elementary schools in the district. The district starts their orchestral music education in the fifth grade. The strings tour helps kids understand just how far music can take them.