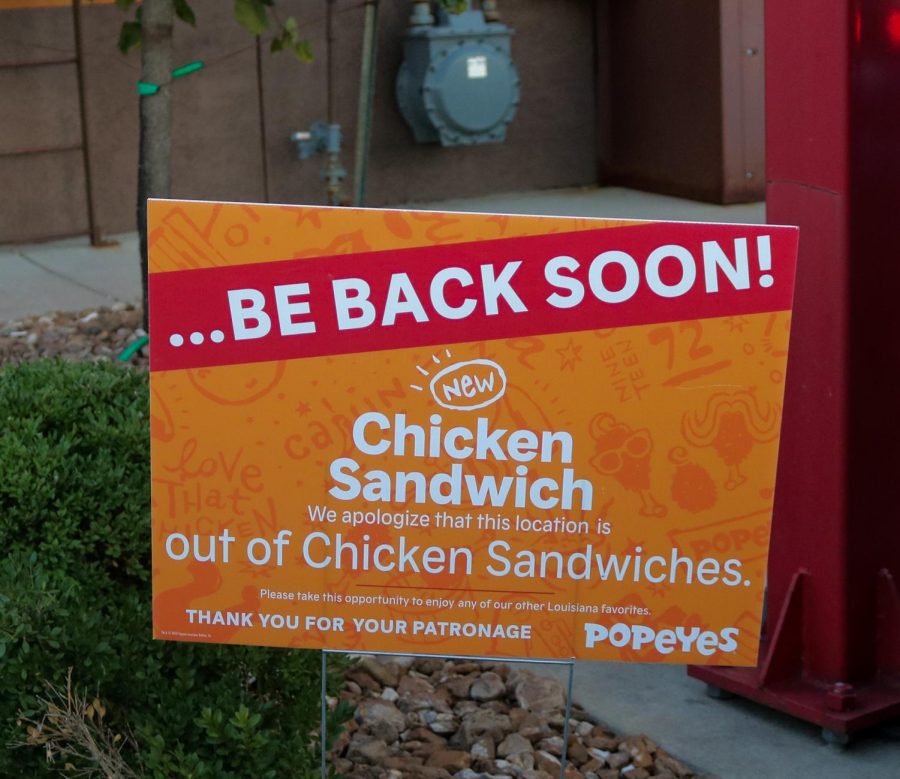 Sign outside of Popeyes informing customers of the absence. Popeyes is currently selling chicken sandwiches again.

A common phenomenon taking the internet by storm is that of the “viral meme.” One recent occurrence of a viral meme started on the social media platform, Twitter, and launched a debate about the best fast food spicy chicken sandwich. The contestants? Most notably Popeyes and Chick-fil-A. The winner? Popeyes, in more ways than one.

Memes – as the internet has named them – are image-based posts accompanied by some sort of comedic, on-trend caption. Every few months, or even weeks, one meme subject or format seemingly takes over the internet. In the land of Twitter, memes such as the spicy chicken sandwich one, run rampant, with all sorts of new twists every time someone new joins the discourse.

“Memes have taken over our culture. In today’s world, big dog companies such as Apple, Microsoft, Wendy’s, Chick-fil-A, and Popeyes use memes to connect to customers,” says senior Libaan Hussein. The prevalence of memes in today’s society is most noticeable to those who frequently use them.

For businesses and casual web-surfers alike, memes can be a viable option for pushing hidden agendas. Whether it’s quietly convincing you to watch the new movie everyone’s making memes about, summoning you to storm a military base to “see them aliens,” or telling you to go try a spicy chicken sandwich, memes have power not to be underestimated.

“Memes have really influenced our culture. They have inserted into our everyday lives from speaking [to] texting.” Said Hussein. He notes how he even uses memes when in casual conversation with friends. The comedic aspect they bring to any interaction is what is most intriguing about memes.

Without much work, the chicken restaurant Popeyes launched their new menu item into stardom. However, as the internet revealed, for some, the best fast food spicy chicken sandwich on the market was Chick-fil-A’s. So, when competition arrived people were eager to see who would dominate.

“Bun + Chicken + Pickles = all the [love] for the original,” said the Twitter page for Chick-fil-A, starting the comparisons.

“… y’all good?” said Popeyes’ tweet in response, and thus began the “war” as some Twitter users have called it.

When it was all said and done, a winner emerged, and that winner was Popeyes. For a number of different reasons listed by the Twitter community and professional publications around the country, Popeyes now had the trophy for the best fast food spicy chicken sandwich.

However, along with winning this, Popeyes also saw the glory of free advertisement. With memes centering around the frenzy of Popeyes drive-thru lines wrapped around their buildings and the competition between the two companies, Popeyes benefitted from a considerable amount of free advertising. With everyone wanting to validly have their say in the conversation, Popeyes across the country were busier than ever and running out of sandwiches left and right.

“Work was hectic, we had a lot of people come in. There were some that just didn’t get any sandwiches, we had people throwing food at us, cussing us out, all types of crazy stuff over chicken sandwiches,” said senior Deon Blake about his experience working at Popeyes during the craze.

This also calls into question the treatment of Popeyes employees during the frenzy caused by the spicy chicken sandwich. The craving for this trendy food item was so huge that it seems normal customer-employee interactions shifted for the sake of satiating customers’ hunger. For many, such as Popeyes employees, the Twitter war had more real-life impacts compared to the people only involved on Twitter itself. While only a PR stunt to some, for Popeyes employees the effects of this craze were all too real.