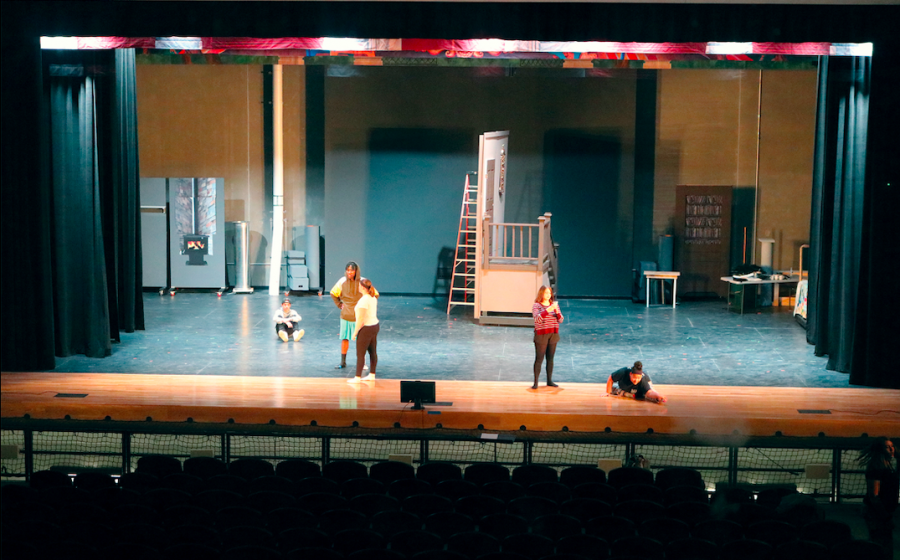 The cast getting ready to do a team yoga workout, on the set of Mary Poppins. Christopher Sauer - Photographer

As this semester comes to an end, and everyone awaits the closing campus expected in January, many were ready for the first performance in the new auditorium that was set on November 20th, when Mary Poppins was in the auditorium for all to see for the first time. Mr. Jackson was also excited as well, “I’m excited and terrified at the same time”. As we welcome a new auditorium, we have also lost an old auditorium that has been in use with a countless number of shows for about the last 90 years, Jackson says, “there’s been a lot of shows there, that auditorium has been in use since 1925, so I couldn’t tell you the number of shows”.

Jackson also added that after Mary Poppins, we can expect to see many other great productions as the year continues, “in the auditorium, we are going to be doing the great Gatsby next, then we will be doing our ‘one-acts’ in the Blackbox, and then we’re doing a musical in the Blackbox in the spring called hands on a hard body.”

Jackson also says the theatre students have been exited, ready for the play too, “yeah, the kids are really excited, especially [because of] the tech, because we were able to get in there and try to figure out how it works, and have been trouble-shooting things, and figuring out what buttons to push, and not to push, and that kind of stuff. So, it’s a huge learning curve for us, but it’s been fun.”

As the Mary Poppins dates neared, rehearsals of the Mary Poppins had also gotten longer, and more nerve-racking for everyone involved as they prepared for the play, according to Jayden Jones, who is a theatre student in the play, “We’ve been rehearsing Mary Poppins since about the middle of September”

With practices running from 2:40 until 5 pm and even later, the theatre was ready for a big production throughout last month, and with relatively low prices to help gain some revenue for the show, tickets were set at $8 dollars for adults and $3 dollars for students throughout the week of the production.

Jones also said that the rest of the crew and cast have had fun, and had been excited as well, “Rehearsing in the new auditorium has been an amazing opportunity and we are all so grateful to be experiencing it. We know not every school gets to have as much support and resources as we’ve had this year”.

Jones also commented on the new technology that the new auditorium has, thanks to the improvements and changes that our school and community is going through. “The new auditorium is absolutely beautiful. We have so much more technology and space to grow and experiment within the new auditorium. The old Auditorium will always hold a special place in our hearts but we’re looking towards the future now”.

Jones also added as Jackson did, that they expected many at the first showing of Mary Poppins, “WE are expecting a huge turnout. With the new building and auditorium, everyone wants to come and see what’s going on.”

In the end, everyone was excited for the first performance in the new building, with Jones feeling blessed like many of us are, “ I feel so blessed to have the new auditorium and being able to share my passion and truly put on a show for everyone.”

And as we opened our auditorium to the elementary schools on Thursday the 21st, Jackson said this, “This was our first feeder school matinee”, and with 7 schools in attendance that Thursday, which included Briarcliff, Choteau, Crestview, Davidson, West Englewood, as well as Eastgate and Northgate. many of the theatre cast had fun with the show and were able to entertain the kids who came to experience it, “Thursday’s show was amazing, and it kept all of those small kids’ attention. That is truly a sign of a good show.”

In the end, the first play to be held in the new auditorium was amazing for everyone involved; around 80 students working in the cast, tech, and in the pit combined, created a show everyone could enjoy, “The kids really worked hard to bring it all together and the audiences are loving their work.”