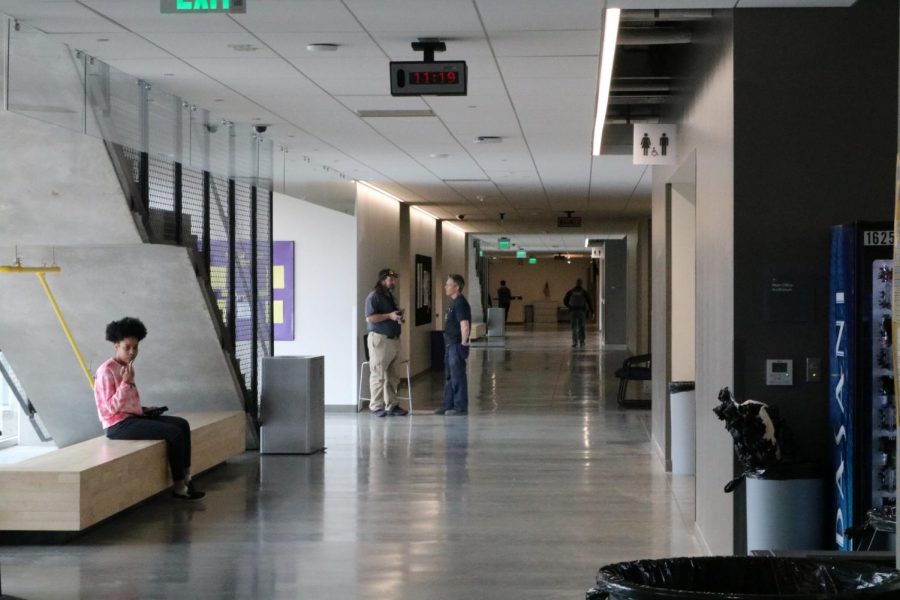 As we become one campus for the first time in a very long time, we look back at our history, “Roughly 93 years,” Ryerson said at the 11th-grade class meeting, “since the last time we were in one campus”, which places the last time we were one campus in 1927, 14 years after the founding of our district. Security-wise, our school is changing as well, for the first time, “as far as security you’re talking about 2 things”, Ryerson states, “what are we locking up, that we haven’t before, and then where are there people where there weren’t before.” According to Ryerson, the new alarm system was being set up and tested as well as used to close the entrances around the entire campus, “what’s happening is that the entire perimeter of the campus, that half a block that’s were on, it’s all secure so there’s no way you can get in or out.” He also explains the reason for the security supervisors in the hallways during every block, and at lunch. “we have all our campus supervisors, all 5 of them, in the same spot. So, we kind of established, a roaming routine for them, so we have people in all the different parts of the building.” Ryerson also commented on the strict hall pass rules that have started to take effect as well, saying that without them, he knows “you’re not supposed to be in the hallway”, and that it also “cuts down on any of this extra traffic.”

The biggest change that has been affected after becoming one campus has been student’s movement, Ryerson says. “You guys kept traveling out of the building that’s the big one.” We’ve gone from walking across the street to be condensed into one building, with one entrance. It’s the biggest change in the students’ schedules. Garrison also added, “rather than having to go between three buildings, we’re now one campus and building so students don’t have to exit the building.” The other big change to students movement has been the end of open lunch, and while that is sad, and it keeps us in the cafeteria, we still have access to the schools’ courtyard area to travel between classes, so we still have an outdoor area, “Students will no longer be allowed to go off campus for lunch. However, students can use the courtyard to travel during classes. The security changes that have taken place will ensure the safety and security of all students and staff on campus.” Dr. White said.

Another big change that has already started has been the security doors, being the only way to enter the school after 7:43 am when school starts. This allows for a safer and more secure environment, but has been tricky for some, “we’ve even had to retrain parents … now you have to be dropped off on 23rd street.” Ryerson said. Garrison added that the one entrance allows for more than just a good entrance, but a secure one too, “I think the big thing is it gives us or helps school personnel to monitor who’s coming in and out of the building. So, when you had three different buildings, you had a lot of entrances that people were leaving and coming in. Now once we get the school day started, you can monitor who’s coming in and who’s going out just through that one entrance.”

The overall reason for all these changes, Ryerson says, had to do with current times. “Kind of like we said at the class meetings, we live in a different day and age now, so the reason that we’re doing it is that we need to be able to insure, or we know everybody who’s coming on this campus.” Ryerson also said it was important because it “allows the eight adults”, who watch over “1,600 people to monitor the safety of that, [with] real quick visuals.” With the ability of anyone to enter the campus and get inside the school, Ryerson says it’s important to have so many cameras, along with one entrance, and require hall passes, “on the outside, outside one to million chance that it’s a student who’s not supposed to be here, then I am going to know that I can stop that kid because they don’t have a pass. So those are all things that we put in place to be real quick visuals, to be able to identify who’s coming at us all the time.” Dr. White, and Garrison both know that the security changes while to protect and secure us, was also a part of the construction from the beginning, “So back whenever they did, you know, the bond with the county for the renovation in North Kansas City High School, that was probably one of the biggest factors that the community had been, you know, to try to ensure safety and security for our students and our staff members during school”, Garrison stated. Dr. White also said regarding the reasons behind the changes that, “The closed campus was supported by the community to ensure the safety and security of all of our students and staff.”

Another security change that had been up in the air for a while was the fire and evacuation routes, which hadn’t been posted yet, and was relatively unknown. Ryerson explained why we had to wait for the plans for so long, “in the original plans for the tornadoes, the tornado routes had every single person in this building going up into the locker rooms”, which doesn’t seem like a big deal, right? “Well, it had taken us 45 minutes to get everybody there.” So, the plans hadn’t accounted for everyone to be on one campus, and new plans for the main building, as well as the new wings, had to be updated, so it wouldn’t take 45 minutes to get us into a tornado drill or take too long on the evacuation routes. “We had to figure out what areas we can use over in the main building so that people in the main building know where they’re supposed to go,” Ryerson added. Garrison said that he was the one who consulted the architects and finalized the evacuation routes, “So the architects I have are finalizing all the fire routes and the evacuation plans.” He states that the new library and new administration center were in part, the reasons for the new evacuation routes, “you do have the renovation to the Admin Center and the media center that wasn’t there before, you know, so those are going to service a lot of people.”

Along with the fire route changes, many people have noticed or have heard of the ‘fire doors’, which supposedly separate the main building and b wing. According to Ryerson, these fire doors do exist, but we won’t see them close, “now, we go into a fire drill with you guys, we have a button we push on the fire panel that puts it in test mode when we put it in test mode, it doesn’t, those (doors) don’t engage.” He also said that you can see them, located on the metal links on the floor when going to the main building, “you can look left, and right you’ll see that there are doors on the sides of it, all those things close in the event of a real fire.”. These doors aren’t normal doors, according to Dr. Ryerson, they are specially made to keep fires at bay, “the doors are called a 3-hour door, which means that if the fire was burning on the other side of that door, it would protect whatever was on the other side of the door for 3 hours.” This would give them enough time to get the fire department over here as well before the 3 hours ended.

This new main building, and newer, stricter rules for the students of Northtown, according to Garrison is better than before, “we have seen a decrease in the number of students who are [fighting] while they’re at school. So I think it’s, it’s, it’s helped, but we’re just going to have to keep an eye on it and see what the long term stats show us.”, while Dr. White says it has also gotten rid of students in the hallways as well, “The closed campus has already increased the number of students in class and has decreased the number of students tardy while at school.” So, this almost, lockdown style security that could be seen as too much, is just enough to show results and help us as a school altogether as well.

In terms of safety, and things like school shootings, and car accidents and incidents like that Garrison, believes it’s an easy decision to choose a more secure school, “when students leave our campus, and they go to quick trip for lunch, I mean, we lose sight of, kind of what’s going on when they’re in their cars. You have so many opportunities for things that can happen that are outside of our control.” So with the changes and the situations it can avoid by keeping us in one building, we can stay safe while also having a good cafeteria, “and so being able to have a facility and a school to where we can service all the needs, you know where before, when you have a cafeteria that can only see 100 people mean you couldn’t go through and do that.” Garrison added. So in general, safety is important to Northtown and has inspired the new rules that we need to stick to as well, Garrison said, “it’s something we always want to make sure we’re doing everything we can to keep a great environment [for students] to learn.”