The Wiz Takes the Stage 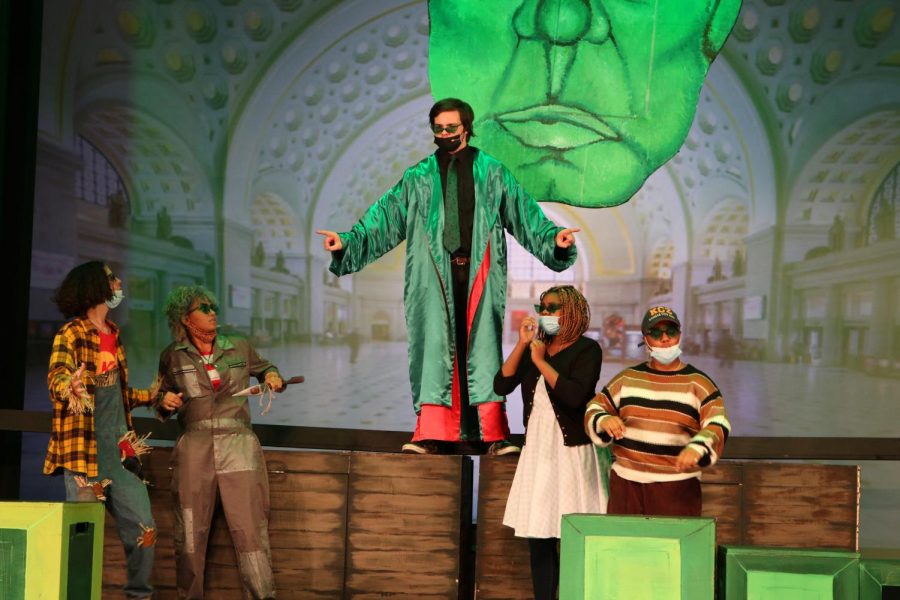 Dorothy, Lion, Tin Man and Scarecrow confront The Wiz. From left to right: Noah Croom as the scarecrow, Ayla Clark as the Tin Man, Feliz Reeder as the Wiz, Ketsia John as Dorothy, Janelle Douyon as the Lion. Photographed by Lily Patterson.

Charlie Smalls’ The Wiz, is a musical adaptation of the original musical The Wizard of Oz; created to give light to African- American performers in a white dominated industry.

The story follows Dorothy, a Kansas farmgirl eager to see the world, who gets swept up to the magical land of Oz when a tornado comes through her small town. She is told that in order to get back home she must visit the Wiz, who resides in the beautiful Emerald City. She follows the yellow brick road to the city, and along the way meets the Scarecrow, Tin Man, and Lion, who soon become her friends. They end up battling Evillene, the Wicked Witch of the West in order to grant their wishes, and in the process learn the true meaning of home.

Originally debuting on January 5, 1975, the musical weaves gospel, soul, blues, and R&B into a Broadway style format. This was groundbreaking at a time when the most popular musicals were Grease and Annie, shows that feature a predominately white cast and audience.

When asked about the show in an interview by the Los Angeles Times, creator Charlie Smalls said, “That music—maybe you’d call it ‘sophisticated funk’—is a combination of all the music I ever knew…  I wrote it all from my heart. The lyrics—they’re my life story.”

The Wiz went on to boast 8 Tony nominations, winning 7 of them, including “best musical”.

Northtown’s production of The Wiz debuted on Wednesday, November 10, with shows airing each day through Saturday, November 13. The show was led by Ketsia John as Dorothy, Ayla Clark as the Tin Man, Janelle Douyon as the Lion, Noah Croom as the Scarecrow, and was directed by Mr. Jackson.

When asked how it felt to step on stage as the lion, Douyon says, “It was really cool. It was definitely different because I had to embody someone that like obviously was a coward but even confident in a way, but I’m not that type of person, I’m much more shy. But it was just so different because I had this spotlight on me that I didn’t have before. My favorite thing about it was being able to bring what I have to the table, I went from an ensemble member to a lead role like that, so it was really cool.”

The choice to perform The Wiz was originally made by students in the program about 3 years ago, but they were not able to perform it due to covid. Because they had already purchased the rights to the show, they were unable to get their money back if they decided upon a different musical. As a result, the decision was made to go ahead and perform The Wiz, and many are glad because it vastly showcases North Kansas City Highschool’s diversity.

The musical was highly anticipated and supported by the student body, with the Black Student Union hosting a special matinee showing on Thursday. With BSU’s support, the matinee gathered quite the audience.

“I think that BSU’s advertisement of the show helped the overall turnout a lot- the audience during the student matinee was great, I was surprised by how many seats were filled during that show. I loved performing in front of them,” says featured dancer Nayeli Garcia.

To the audience’s surprise, Northtown was even able to put their own spin on the iconic musical using a new projector to cast the backdrop as notable locations in Kansas City. Some of the iconic pictures included the World War I memorial, Union Station, the Western Auto Sign and more. This small but significant touch brought a homey feel to the musical originally set in our neighboring state, Kansas.

As Mr. Jackson’s final year at Northtown, The Wiz was an especially high note to leave off on. He says, “The only time I really got emotional was the scarecrow scene, when they were singing, because I had Noah who is a senior… and in the back where I was standing, I could see the rest of the ensemble singing and also some kids who were 7th graders… So literally within that number I saw the people I have worked with for years, and the future of the program.”

“It was a great show to leave on, for my last [fall] musical”

Northtown Theatre Association is currently in rehearsal for their next production, Streetcar Named Desire, which will air January 27.